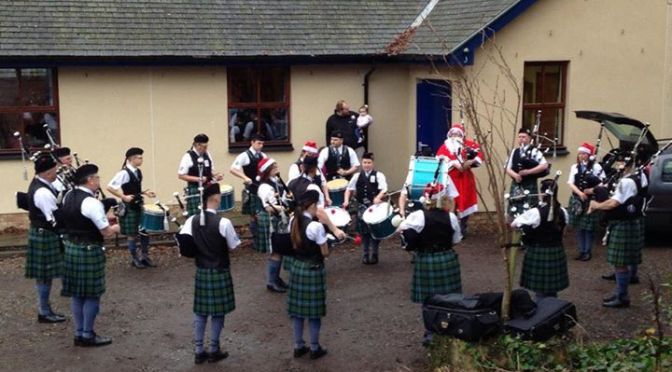 You thought that after the Cèilidh it all went quiet ’til May, a village band never rests. We turned out to lead the Remembrance Day parade on a cold but bright Sunday morning. An 8 o’clock start holds no fears for us and we are soon tuned and being given last minute instructions on deportment and etiquette suitable to a band at the front of what is a fairly important parade these days. I like the ceremonial and martial air of these parades, colours paraded, everyone on their best behavior, shoes shined, kilts pressed and chrome polished. The Reverent Stephen Smith took the ceremony at the War Memorial, where the village organisations’ wreaths were laid, respect paid and Melissa played the lament.
The message was simple, take your instruction from the BB guy. Doddle! We’re old hands at this. So how the rolls started after the drones is anyones guess.
A contingent of the band attended the service and got goosebumps when Melissa played Flowers of the Forest at 11 o’clock, the pipes seemed to be coming from under the floor, it was eerie. After the service we lead the uniform organisations back down to the War Memorial. It’s all down hill so “no dramas” until we get abreast of the Memorial and it’s, “Eyes right!” It’s not easy to do an Eyes Right while doing a Right Wheel over a traffic island. Another cold but exhilarating parade comes to an end.

So after a few weeks of trying to persuade Big Stewart to learn his own drum score we abandoned the idea of playing the Battle of the Somme set at the Coffee Morning on the 29th. This was our first big fundraiser for the Albert 2016 fund and the Band Baker had corralled the village Ladies to bake and make all things christmassy. The stalls were a wonder to behold and the prizes for the raffles and tombolas would have turned the head of Croesus. Santa even joined us for a few tunes on his pipes, did you know he was a piper?
We had no idea what was involved in running a thing like this successfully and the fact it was a success is down to the hard work of the Ladies from the West. We salute you! Lucy and the Emmas were magnificent as well, selling just about everything on their stall. James the Hat lost his band bunnet so if anyone sees a Glengarry in the Guide Centre give me a shout.

The first few weeks of December are not a time to be playing outside so accordingly we play 3 sub zero Christmas Lights parades back to back. We start in Erskine Hospital and lead a parade through the grounds to the Tree of Peace. Melissa played a solo this year and had seasoned cynics crying. Whisky is provided to thaw out the pipers and drummers. Erskine is a special parade for the band. The following night we were in Beith leading Santa through the village, this is a big brash “lights on” ceremony, lots of razzamatazz and waltzers. The guy selling the illuminated tat for weans walked past like a close encounter of the third kind. The best bit is holding a cup of scalding chocolate and getting feeling back in your fingers. Then on the Monday we were out in Kilbarchan to see Miss Lilias turn on the christmas tree lights. George Bowie (aff the tranny) was MC and kept the crowd amused while the various village choirs, Jamie Mac and ourselves provided the entertainment. The lure of soup and sandwiches was too much and the band sloped off before the finish for an engagement in The Trust Inn, sorry people, we are much in demand.

The Christmas Social starts in the Scout Hut with tea and buns. Juice for the weans and cakes galore. Later, when the children are ill from cake overdose, the adults tiptoe along to The Trust Inn for a small sherry. We even took part in the pub quiz, didnae win but hayho, it’s the taking part. This was our most successful year to date and a huge thank you is extended to everyone who helped make it possible; to the Band Baker and the Ladies from the West, Derek and the Tutors, the Medic, all the parents and grandparents and Band Dog.

Merry Christmas everyone, Santa will be here tonight