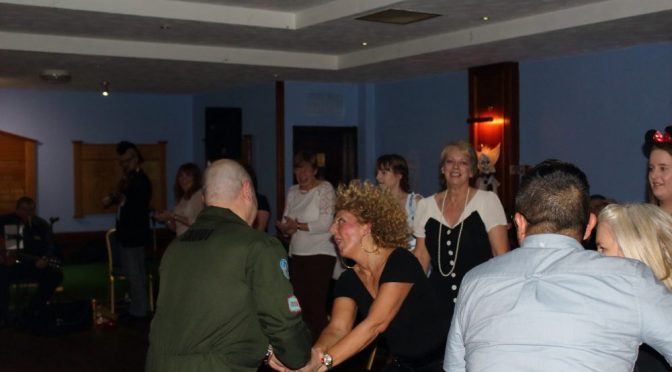 It’s been two weeks since the Cèilidh. This was an unqualified success again thanks to the hard work of the Usual Suspects. While I freely admit I wasn’t there for most of it and should be writing a review of a memorable concert, I arrived as the Scottish country dancing went into overdrive and all the stupid, scary and dangerous dances were called.

What I missed was the unbelievable sight of a pipe band with Winnie the Pooh, Wilma Flintstone, Minnie Mouse, Robin Hood and a swarm of fairies on pipes and Elvis, The Joker, Fred, Eeyore and Luigi on drums. The room was busy but not so busy as to have people falling over each other and Clamjamfrie were in fine form. The raffle prizes were immense and although Joey Clam didn’t win the hamper he scooped a litre of whisky.
The quiz raised over £1,000 this year, huge kudos to Derek. The highlight of the night was the restaging of John Travolta (James the Hat) and Olivia Newton  John’s (Isy) Grease dance routine to ‘You’re the one That I Want’, after plenty of hip wiggling and strutting Danny dropped to his knees and his wig fell off.

The village firework display on Bonfire Night is not an event we attend as a band but gives us a chance to practice standing in damp grass and mud in preparation for next season. The fireworks, provided by the uniformed yoof organisations of the village, were very oooh and aaaah worthy.

The Trefoil Guild had approached Pipey about the band giving a talk on our France trip. He told us the Guides so I thought a wee 10 minute slideshow would suffice to enlighten but not bore the young lassies, imagine my surprise when I found out it was the Guild and it was 10 days away. We have a big presentation to do on the 1st of December and decided to have this as a trial run after I had sweated blood to get the thing ready in time. James the Hat and myself were made very welcome by the ladies of the Guild and they seemed to enjoy our talk which we may have to take on the road to other Guilds, Clubs and Groups although we won’t take my pipes which sounded dreadful.

Our young pipers performed at the Graeme Johnston Memorial competition for the first time on Saturday 12th November, our youngest soloist was James at 9 years old and while there were no trophies the judge (Donald McPhee) was very complimentary even going as far as thanking KPB for turning out in such numbers because as usual we had turned up mob handed. This is a huge thing for the guys who played because it isn’t demarcated on ability but on age so they were up against players from much higher graded bands. If they improve as much in the coming year as they have in the last they should be lifting prizes, my place in the competition band will be under threat and I’ll have to just hang about in the Beer Tent relating lame anecdotes to strangers. 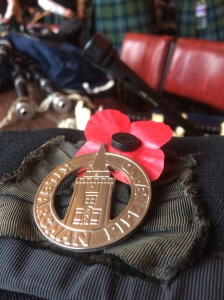 This remembrance day saw the Pipey at his most vicious with the Idiot Box, it’s usually okay to be in the building by the stated time but if you weren’t in the circle ready to play at 8:45 it was £5. The weather was better than last year but it’s November in Scotland so cold and driech is expected. This year the laments were played by Mickey Blue-eyes and yours truly. I have managed to avoid this for years but no matter how hard I stared at the floor or refused to make eye contact Pipey chose me to play at the church. I wrongly assumed there would be a timekeeper at the church to tell me when the 2 minutes were up and they nearly had the silence broken by ‘Old Car Horn’ as my iPhone neared zero. The drones sang into life and the melody lamented along until the last part when a strange gurgling noise erupted from my chanter. I took this as my cue to give it ‘The pipes fading into the distance’ and hoofed it up the path. After a very pleasant lunch in Habbies Bar we headed over to Bridge of Weir to help the Legion with their ceremony. This was again indoors as the veterans had been soaked once already. My chanter now sounded dreadful and no amount of TLC could fend off the inevitable New Reed. Thanks to the British Legion for looking after us.

Next up is the Albert Presentation