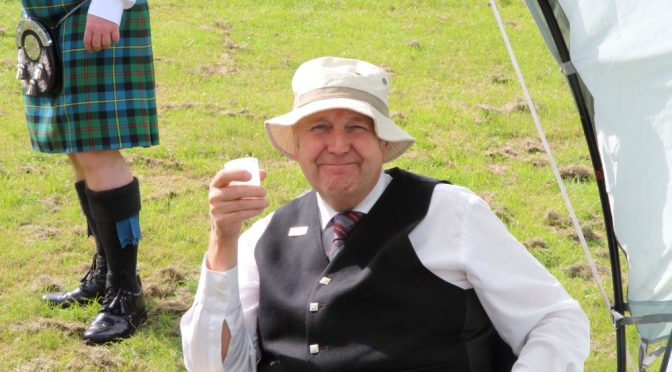 I think Pipey is arranging these early starts to punish us, we headed to Wemyss Bay in the grey morning light for our rendezvous with a ferry for our second trip overseas. Thankfully the bus was only an hour late. I personally owe Rothesay an apology from last year and don’t intent to be that guy this year.

The travelling Drappt had a small Laphroaig breakfast before being turfed off the coach and into the ferry saloon. This year the coffee on the boat was excellent and it all stayed in the cup, the bacon rolls were fantastic and the weather was brightening. Rothesay and I seemed to have come to an understanding; the sun would shine and I’d behave.

The ferry crossing is shorter than some remembered and poor Crystaltips had to head back to the bus with half a hairdo when Le Salon shut early. You wouldn’t want to light a match in the Observation Lounge with that amount of hair lacquer in the air.

I supervised the raising of the Event Shelter because every endeavour needs a big know-it-all shouting at people, Scooby tuned the drones, Pipey did voodoo and James the Hat drank Auntie Helen’s whisky. This counts as domestic bliss in Pipe Band Land. A soothing balm before the shock and fury of the Worlds. After an admittedly alcoholic coffee it was time to visit the park. The great thing about Rothesay is the stalls appear to be run by local organisations; fantastic produce at realistic prices and a very reasonably priced can of ice cold beverage in the beer tent. Back at KPBHQ  a nameless person in a Lower Clyde kilt with the bearing of a Pipe Major approached clasping a bit of paper. I’d promised him a pint at Helensburgh (the print out proved it) and he’d come to collect but it’s a difficult thing to arrange what with band commitments and watching the big lassies dancing and I couldn’t find him in the beer tent. So, Cowal Big Man, bring your voucher.

When it comes to stress free summers 2018 is going to be up there, the biggest worry in the first half had been heat-stroke but healthy levels of fluid intake fixed that and the second half worry of trench foot hasn’t yet materialised however the zero stress of knowing you’re not playing robs you of the impetus to practice the hard stuff. Next season I will be embracing the stress of competition if only to stave off sclorosis.

The March Past was another Big Batalion style thing, having done three of these before I’m now an expert and could be heard scoffing at the youngsters confusion. There was a bit of talking through the Chieftain’s speech and I had to give Mickey Blue Eyes a warning, I’ll be taking names in Dunoon and naming and shaming. With the prizes distributed the main event could begin.

We all posed with Bluebird.

My playing on the march down the street would have had Stuart Liddell burning his pipes, all part of me paying my debt to Rothesay but it all came to a staggering halt when we missed the ferry the gin got opened and Wee Mel put apple juice in her Sailor Jerry.

Next up Worlds Week and the World Championships.