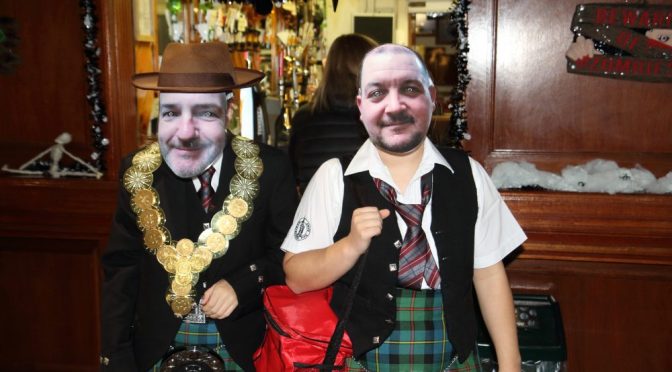 It’s customary to do a review of the past 12 months and a wee bit of scrying about the coming year. A grim tale of torment and disappointment I hear you call yet for all the friction we picked up a load of trophies  and some recognition for the hard work being done.

The year began in the expectation that we’d be asked back to France for the 100 anniversary of the end of The Great War and many of us had been practicing drinking wine in anticipation. It wasn’t to be so we concentrated on slow aires and moody silences, James the Hat and I concentrated on Laphroaig as we’d been Drappt. There was serious concern for Old Blue early in 2018, a broken back ends most careers. When you see him standing playing his pipes ask him, “So, you broke your back, what happened?” and he’ll answer, “It got better.”

The early part of the year saw the Beast from the East cancel practice and turn my Boozecruise to Amsterdam in to a rolling, bucking, vomit inducing 2 day floating hell. Later, the outdoor competition season shook off it’s usual rainy aspect and treated us to unending weeks of glorious sunshine, even the World Champions were tempted out at Gourock

Pipey bought a house and the drum corps filled it with drums, I have vague memories of Pipey’s house as I visited it after the Acki Baba parade, oh that Argyll hospitality!

By the run up to the Worlds my drapptness was having a serious impact on my playing, if you don’t have anything to practice for the tendency is not to practice and to spend the practice time inventing really good reasons not to practice. I’m getting quite good on the mandolin as a result. Never has a season close been so warmly welcomed, “new tunes” was the cry.

The end of the season saw the departure of some good friends; Emma Tenor the snare drummer moved to Lower Clyde, Richie has become the Peripatetic Piper and the rumours of Chris’s departure were much exaggerated.

For 1 horrible minute I managed to get elected onto the management committee, then common sense prevailed and I promptly resigned. The tale end of the year was a whirl of fayres, parties, dances and the Mod. My second Mod will not be my last.

2019 will see KPB playing at the Hydro in April, not in the car park, on the stage. This is a huge undertaking with thirty odd tunes to learn and no idea of the stage direction until the day. A little bird tells me that the French want us back in November but whether anything comes of this ?? Whatever the year brings you’ll find us out and about at competitions and gala days. I hear tell we’re getting new big signs with the band badge on so you’ll be able to find us and drop in for a cuppa, they are not there so me and The Hat can find the Event Shelter from the beer tent. One thing that I can predict with clarity is that I will buy Big Gordy a pint, sometime. Next up, practice, practice, practice