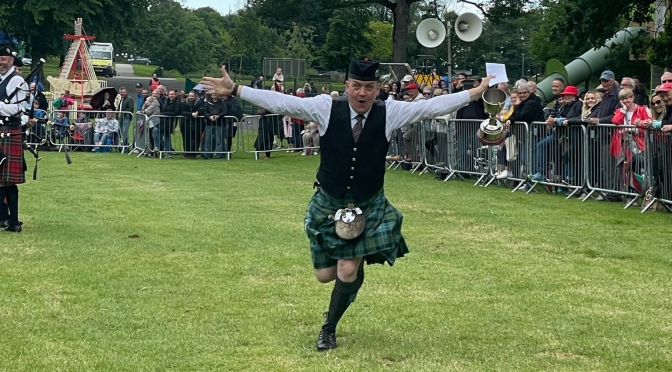 This blog will be full of second hand stories, supposition and stuff I made up. So nothing new there then. I was booked on the bus , boat and accommodation and had even paid the pennies and put my name on the list but a family tragedy engulfed me and I had to step back as some things just take precedence.

I joined my already high as a kite bandmates in the practice hall where we played a few tunes then left so Pipey could concentrate on chanters. Those not playing went to the Scout Hut to talk the toot practice before retiring to the BC for a small refreshment to make sure bladders were full to bursting before the bus left at midnight. (Note to Committee: If we’re going next year can we get the ferry booked tomorrow)

The pre travel blether of all night parties on the boat seems to have been just that as my clype reported that the ferry crossing was very quiet, the highlight being the dawn but that the bus floated to the accommodation on a pounding torrent of Venga Boys, as is only fitting.

Now the story becomes vague as nobody is talking, from what I have been able to piece together Friday was spent playing frisbee, visiting places, fighting over rooms and waiting for dawdlers to turn up. I’m sure that practices were had and instruments adjusted, that beers were consumed and hot tubs luxuriated in.

Here is all the information I have on the UK Championships: We won Grade 4B, the video of Pipey running back to the band doing “aeroplanes” and being crushed in a group hug went viral, we let Field Marshal Montgomery play off the field before us, James the Hat lead the band from the field carrying the trophy. Big party.

I am now looking for a new clype as the report I received from the Sunday was, “those two pints of Guinness in the Crown were really nice.”

So there you have it, a disappointing lack of clarity. What this highlights is that I really have to be there to get any idea of what is going on and that if you, dear reader, want regular insights into the closed world of Pipe Bands I had better get my priorities sorted.

A brief aside: We went to Girvan for the Lowland Gathering and did alright.

Next up is the Stewarton Bonnet Parade.